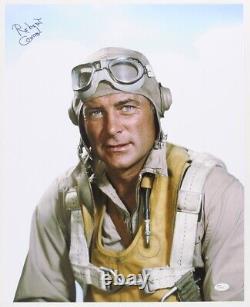 2016, Robert Conrad completed a private signing from his California home. After suffering loss of his writing hand due to a motor cycle accident 10 years ago, Conrad painstakingly learned to write with his opposite hand. The current version of his signature, as seen here, is a neatly printed "Robert Conrad" effort.

Each photo was signed in near mint blue sharpie. The photo has been authenticated by the professional staff of JSA and their hologram and card accompany this lot. This item is in the category "Collectibles\Autographs\Television".

The seller is "mearsauctions" and is located in this country: US. This item can be shipped to United States.